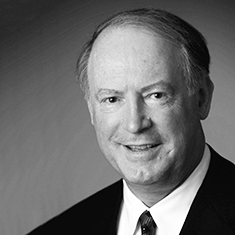 Mr. Ruettgers is widely known and respected in the technology industry serving for many years as CEO of EMC Corporation, the world leader in products, services and solutions for information management and storage, from 1992-2001 after joining in 1988. Leading the company in a decade-long trajectory of growth, he was also Executive Chairman of the Board for three years through December 2003 and Chairman of the Board of Directors through 2005. During his term as CEO, he was named one of the “World’s Top 25 Executives” by BusinessWeek, one of the “Best CEOs in America” by Worth Magazine, and one of the “25 Most Powerful People in Networking” by Network World.

He spent much of his early career with Raytheon and was the Lead Director of their Board for a number of years. He has served on many other BODs, including Gigamon and Perkin Elmer. In November 2002, Ruettgers was inducted into the Industry Hall of Fame, joining a select group of the innovators, entrepreneurs, and leaders who have helped shape and expand the global IT industry.

Mike has frequently spoken at key venues around the world, including the World Economic Forum, Harvard University Nieman Fellows seminars, the Raytheon Lectureship in Business Ethics at Bentley College, and major IT industry conferences. He is also a frequent contributor of articles on key policy issues, including the responsibility all organizations have to protect and preserve their information.

Mike holds a BS from Idaho State University and an MBA from Harvard Business School.